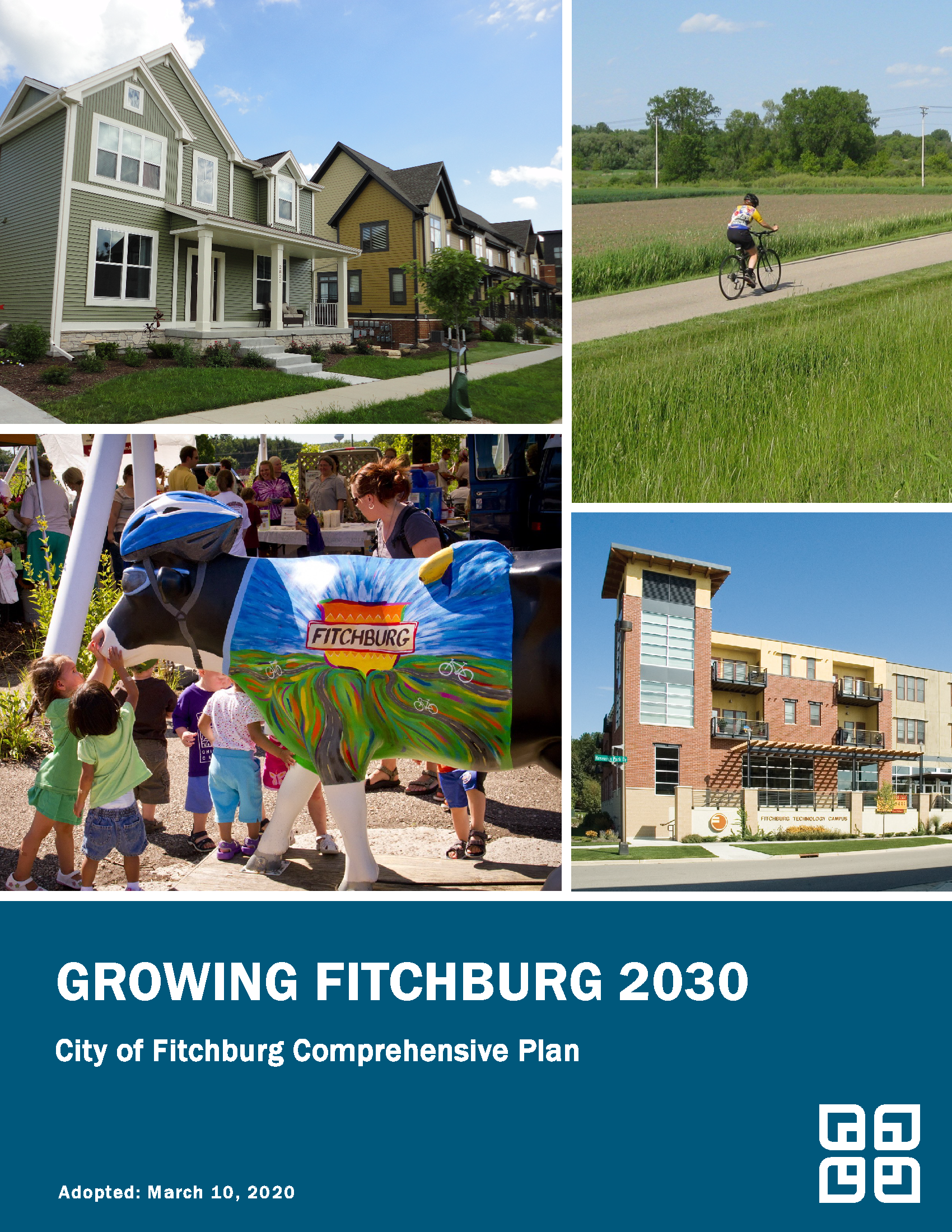 This comprehensive plan guides the City’s growth, decision-making, and investments over the long-term. The City’s original 2009 plan considered a planning period of 50 years (while State Law requires a planning period of at least 20 years) to understand impacts of the City’s decisions today. Growing Fitchburg 2030 is an update to the City’s original 2009 plan that outlines the City’s goals, objectives, and polices which serve to guide the City’s growth and development from 2020 to 2030. In addition to policy guidance it also serves as an inventory of the City’s many features and qualities as well as a snapshot of resident’s preferences and opinions on the issues the Plan addresses.

How is the Comprehensive Plan used?

The City uses the Plan as a big-picture guide for actions and decisions.  It short, it plans WHERE and HOW growth will occur. This can be summarized in the Plan’s "Future Land Use Plan Map" which is supported and expanded upon by the text of the Plan.

Many actions are also informed by more detailed planning efforts that are incorporated into the Comprehensive Plan. We often refer to these more details plans as “area” plans or “functional” plans. Area plans could define detailed recommendations for a specific neighborhood, or strategies for a redevelopment area, for example. Functional plans might address a system or topic that spans a larger geographic area, such as a bicycle plan, housing plan, or agricultural plan. The Comprehensive Plan serves as a unifying “umbrella” Plan under which all other plans and goals are generally consistent. Fitchburg has many other detailed plans, which are available on the webpage for “Adopted Plans and Studies”.

City officials are not the only individuals using the Plan. Property owners and residents provide input on the Plan, and may use it to understand the future potential and character of development in their neighborhoods and community. Developers use it to understand where the city intends to direct growth and make investment decisions accordingly. Community organizations also use the Plan to guide and support their efforts. Land use planning seeks to provide a predictable system under which complex decisions by various stakeholders can be made.

Construction of the City’s 2009 Comprehensive Plan occurred over several years. A rigorous land-use modeling exercise formed the basis of the City’s future growth map identifying long-term Future Urban Development Areas (FUDAs). In 2019, the City Council directed staff to complete an update that would maintain the aforementioned general growth strategy while gathering public input and refining other goals and policies of the Plan. The update process began in May 2019 with unanimous adoption by the Common Council in March 2020. The following public outreach activities informed the Plan update.

A series of neighborhood meetings and listening sessions were held in October 2019. Residents were notified of meetings via multiple channels, including postcard mailers as to which of the five meetings they were encouraged to attend based on the location of their residence (see map). These meetings allowed residents to engage in the Comprehensive Plan update process by providing feedback on the issues and opportunities for improvement in their neighborhood through an assortment of engagement activities. The results of these activities were compiled from all five meetings and summarized in the final Plan. The neighborhood meetings also informed residents of additional opportunities for continued engagement in the planning process.

A community survey was also administered during October 2019. The survey asked residents to respond to a variety of questions that sought to understand resident opinions and preferences on essential issues addressed in the Comprehensive Plan. The survey asked resident preferences on a variety of topics that ranged from Citywide land use and development policies to neighborhood scale topics like safety and walkability, among many others. The survey was administered in a print version (available in English and Spanish) that was distributed at neighborhood meetings and available for pickup at a variety of community locations; a digital version of the survey was also administered using POLCO software. The results of the survey were compiled from each version and summarized in the final Plan.

A public open house was held on November 20th, 2019, at Fitchburg City Hall. This gave residents an additional opportunity to learn about the comprehensive plan update process via a presentation by Planning staff, which also summarized the resident feedback received during the neighborhood meetings, the community survey, and the various committee meetings. The presentation was followed by the open house, which allowed residents to view informational posters and ask questions of their elected officials, Planning Commission members, and City staff that were in attendance. Residents were also informed of additional opportunities to provide formal feedback on the draft Comprehensive Plan update in the months following the open house.

Following the November open house, two formal public hearings were held as a final opportunity for the public to provide feedback on the completed draft of the updated Comprehensive Plan. On January 21, 2020 the Plan Commission held a public hearing with an opportunity for public comments about the Plan update; at the end of the hearing the Plan Commission recommended the Common Council adopt the Plan with changes. A 30-day public comment period in which residents could submit written comments preceded the Common Council public hearing on March 10, 2020. Residents could also submit verbal comments at the March 10th public hearing. Common Council voted unanimously to adopt the updated Comprehensive Plan at the March 10th meeting.

Requesting Copies of the Plan

You can download the complete document or individual chapters below. A printed copy of the Fitchburg Comprehensive Plan is available for review at City Hall from 7:30 a.m. to 4:30 p.m.

A CD of the Comprehensive Plan may be purchased for $10 or a printed color copy bound for $90 from the Planning Department.

The Comprehensive Plan provides a process for amending the plan. Minor amendments will be processed no more frequently than two times per year.  The Planning Department, Mayor or three members of the Common Council are the only ones that may recommend modifications to be considered as an amendment to the plan under the collective process.  Amendments are generally defined as minor changes to the maps or text of the Comprehensive Plan.

If you would like to receive notice of any proposed comprehensive plan action that may be taken that affects the allowable use of your property, please email the Planning Department or mail a written request to:

Requests for notification should include the following information:

Amendments to the 2009 Comprehensive Plan