Clothes dryers are an everyday household item that can pose a serious risk of fire if they are not properly maintained. A clothes dryer operates by blowing hot air through a revolving drum. As clothes are dried, lint is produced as water is removed. Lint accumulation, in the dryer and in the dryer vent, can reduce airflow, and create a highly flammable fuel source.
Stay Safe
To increase safety when using a clothes dryer, we recommend the following tips: 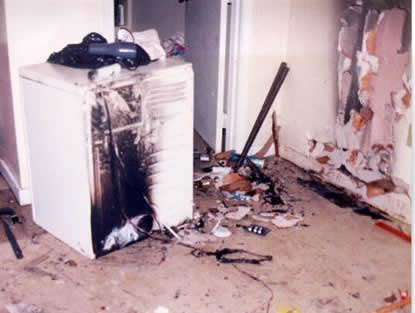 Dryer Fires Do Damage
In a report released by the U.S. Fire Administration (USFA) announced the statistics regarding residential building clothes dryer fires. Between the years 2002-2004, an annual average of 12,700 clothes dryer fires occurred in residential buildings. These fires were responsible for an estimated 15 civilian fire deaths, 300 civilian fire injuries, and $88 million in property loss each year.

The report, Clothes Dryer Fires in Residential Buildings, was developed by the USFA's National Fire Data Center as part of its Topical Fire Research Series and is based on data from the National Fire Incident Reporting System (NFIRS) for 2002-2004. The report examines the characteristics of clothes dryer fires and provides recommendations for clothes dryer fire safety.
A copy of the topical report can be downloaded online.